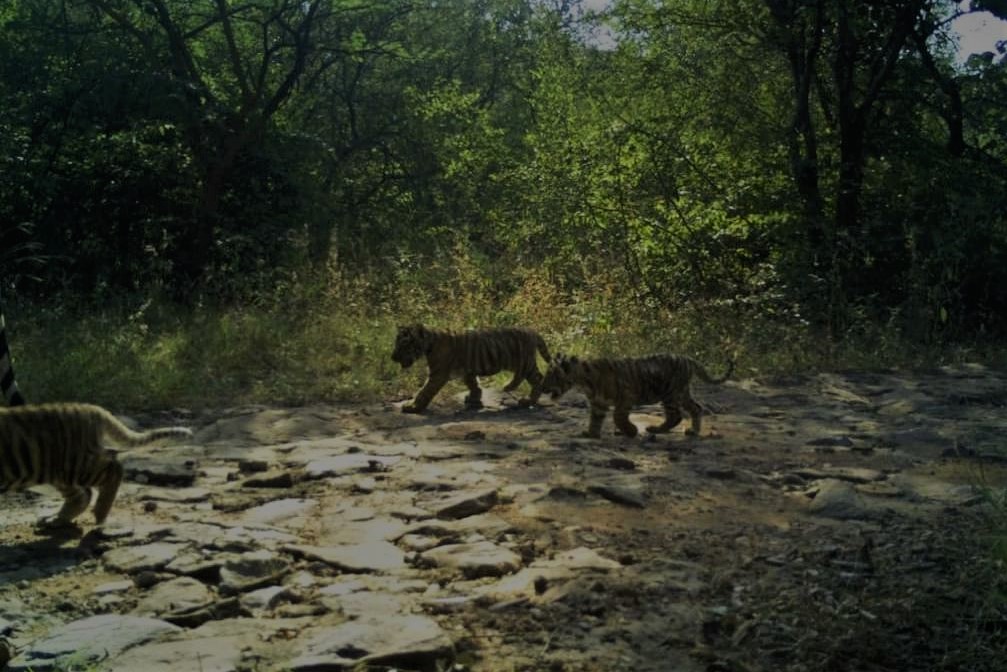 On October 31, 2021, three new-born tiger cubs were spotted for the first time with its mother at Ranthambore National Park (RNP) in Rajasthan's Sawai Madhopur district. According to the forest department, a tigress was located with her new-born tiger cubs in Khandar range by a forest department cameras trap on 29 October 2021. The mother tigress has been identified as T-63 aka Chandra! It's the third time she's had a litter. The tiger cubs should be three to four months old at this point.

Chandra (T-63) is an adult and mature tigress from the Ranthambore Tiger Reserve, with an estimated age of ten years. She is the dominating tigress in Ranthmbore's Lahpur Valley. She is Krishna's first litter, and she was first seen on May 26, 2011. In her first litter, the tigress Krishna (T-19) gave birth to three tiger cubs, two males and one female. T-63 (Chandra) is one of them, while T-64 and T-65 are the identities of her two brothers. On July 7, 2021, Suraj, alias T-65, died of cardiac shock.

Tigress Chandra as a mother

She has already given birth to two litters. In 2016, she delivered her first litter, which included two tiger cubs. They had parted from her mother (T-63) as sub adults, and both cubs are identified as T-93 and T-94. She had her second litter in October of 2018. We have two male tigers, T-120 and T-121, from this litter. It is the 3rd litter of Chandra. No doubt, she is the Great Mother for Lahpur Valley of Ranthambore Tiger Reserve. You would like to read more about tiger-cubs !