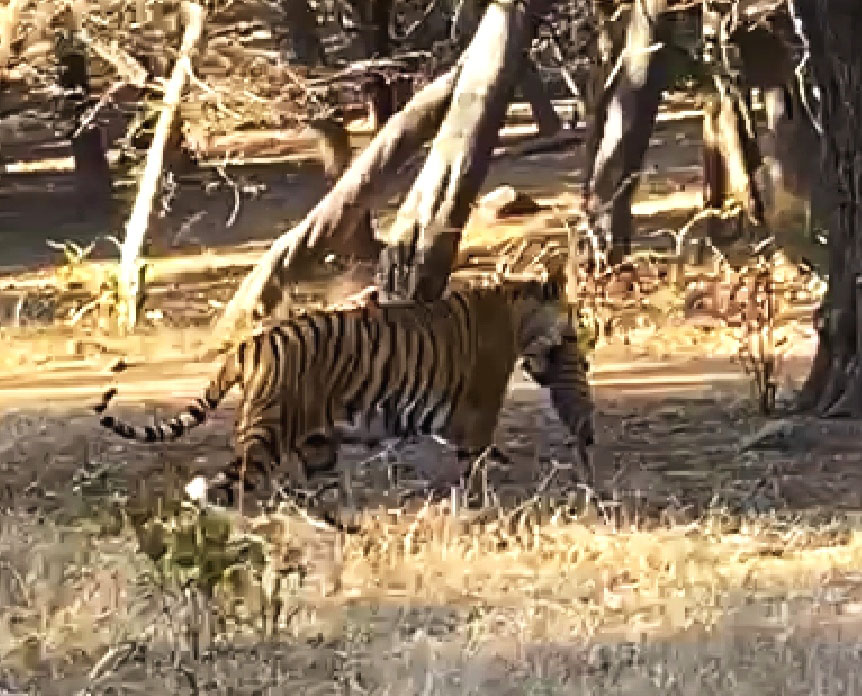 A new-born-tiny tiger cub was sighted with its mother, Noor aka T-39, during a Ranthambore Safari in Rajasthan's Sawai Madhopur district!

The rarest tiger sighting in Ranthambore occurred today during a morning safari when T-39, a fourteen-year-old, senior tigress, was spotted with her new-born tiny tiger cub in zone number one. Noor, the great mother, was seen with her one youngster, which she was moving by holding in her mouth with her canine. Noor's fifth litter has arrived! It's a fantastic day for wildlife. It's possible that the little tiger cub is only a month old.

"Historical news from Ranthambore, tigress Noor observed with cub at zone 1," stated Rafeeq, president of the RNGA. She is a mature tigress, ranging in age from 14 to 15 years. What a terrific habitat for triple BOOM!" he said.

With an estimated age of fourteen years, Noor aka T-39 is a well-known & senior tigress from the Ranthambore Tiger Reserve. She is now the most powerful tigress in zones one and six. She is the first litter of Old Sultanpur female, and she was first sighted in August of 2008. The tigress Old Sultanpur female (T-13) gave birth to two tiger cubs, one male and one female, in her first litter. T-39 (Noor) is one of them, whereas T-38 is her brother (Male tiger).

Tigress Noor as the great mother!

She already has a fourth litter on the way. In 2012, Sultan/T-72 fathered by T-24, Conservator, she had her first litter of one male cub. Pankaj Jain, a wildlife guide, discovered the first litter on Monday, May 21, 2012. She gave her second litter of two male cub’s father by T-24, Conservator. Aditya Singh, a Ranthambhore wildlife photographer, discovered the second litter for the first time on May 28, 2014. In March 2016, the third litter was discovered in a camera trap. She had her fourth litter in November of 2016. We acquired two notable tigresses from this litter, Noori (T-105), and Sultana (T-107), while her third sister, T-106, was relocated Mukundara Hills Tiger Reserve on December 18, 2018.

Noor has produced her fifth litter. Without a doubt, she is Ranthambhore Tiger Reserve's Great Mother. They are to be praised! We all hold her in high regard as naturalist guides! For visitors to zone no one, this is fantastic news and a fantastic day.

In 1955, Sawai Madhopur Wildlife Sanctuary was established, and in 1973, it was included in Project Tiger's scheme. Today, Ranthambore National Park is home to more than 70 tigers. In 1980, it was designated as a National Park.