Three tiger cubs sight with their mother, Ladali tigress aka T-8 in Ranthambore ! Expectations vs. Reality 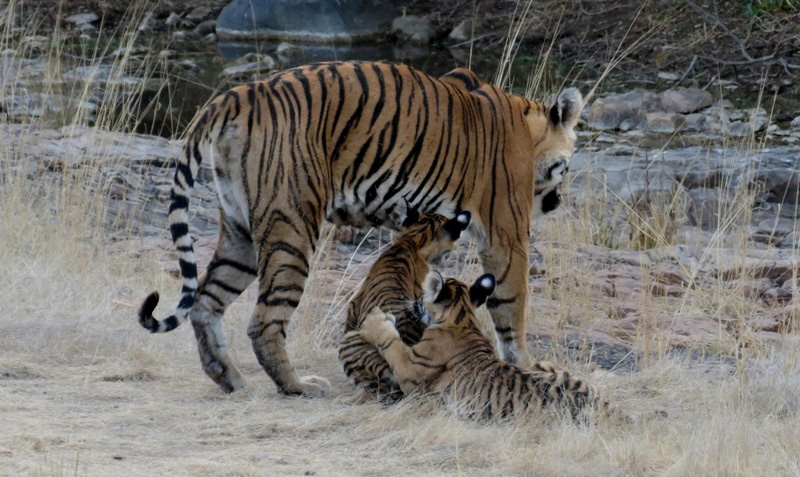 Many times in a tiger reserve, the tourists are disappointed on not spotted any wild animals like tiger and leopard because they are shy and elusive. Just after the rainy season, during winter time - it is quite hard to see wild animals in the forest due to dense forest. But, this winter, it seems quite good, on 13 October 2020, when the tigress, Ladali aka T-8 was walking in the grass and her three tiger cubs were following her in zone no.6 . No doubt, it is great achievements to see tigress, Ladali and her three cubs in playing mode because she is a quite shy and elusive tigress. Thanks God, It’s really fantastic day at zone no.6 due to great spotting. These tiger cubs should be nine or tenth months old. It is the fifth litter of Ladali and the litter was spotted first time in zone no. six on Wednesday, 12 February 2020. It’s really great day for wild life.

Ladali is the dominant tigress of Kundal and Balas sanctuary. She roams between zones - 6 and 7 now days. She shares her territory with dominant male tiger, T-34 ( Kumbha ). From the last session, another young male tiger, T-58 has been reported in this area frequency.

She had delivered her second litter of one cub around November 2013 in Balas area but little is known about the litter. She had given third litter including two male cubs, spotted with 3 months old cubs for first time on 4th June 2014 at Chhidi-Kho area (zone no. seven ).

It is the 5th litter of Ladali . No doubt, she is the Great Mother for Kundal and Balas area of Ranthambore Tiger Reserve. God bless whole family! We all nature guides respect her by our heart! It is wonderful sighting day for the tourists of zone no. six.