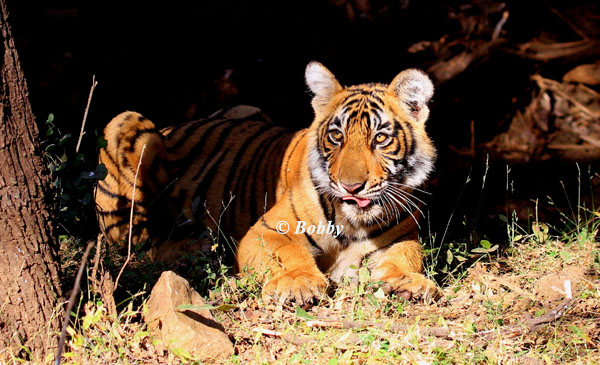 Ranthambore | The tigress, T-61 aka Junior Ladali has been sighted with her new-born cubs in Ranthambore National Park, situated in Sawai Madhopur district of Rajasthan.

The lucky tourists who were in zone no.8, spotted a tigress with her newborn cubs on Wednesday, 09 Sep.2015, during Ranthambore safari in the park.

That’s great news was confirmed by Mr. Sanjeev Sharma, the Assistance Conservator of Forests Ranthambore in news paper. He said that new born cub should be around 4 months old. T-61 that is known as Junior Ladali is the dominant tigress of this territory. Due her territory, it is supposed that it might be a first litter of T-61. She is about 4 years old tigress .She shares her territory with dominant male tiger, T-58 who is known as Rocky Male in Ranthambore National Park. Therefore, Tiger, T-58 aka Rocky Male should be his father.

The tigress, T-61 was the first litter of T-8 along with her partner & dominant male tiger, T-34 (Kumabha). T-8 that is also known as Ladali had given her first litter including one male & one female in 2011. After grew up as sub adults, they had separated from her mother (T-8 aka Ladali ) around 2013. While female cub is known as T-61 had settled in zone no. 8 (Balas area) of the park that was also part of her mother’s territory, male cub became T-62 had to move out of park sometime around monsoon of 2013.

Later, the tourists and the forest guards reported that they saw two cubs with mother. They tried to take photo by mobile, suddenly the tigress with her cubs disappeared in the bushes and they did not get any picture. It is a wild life, it does happen. Don’t mind and wait more! And hurry up, hold your camera and head out for a wildlife safari. Who knows you may be the next Lucky One!