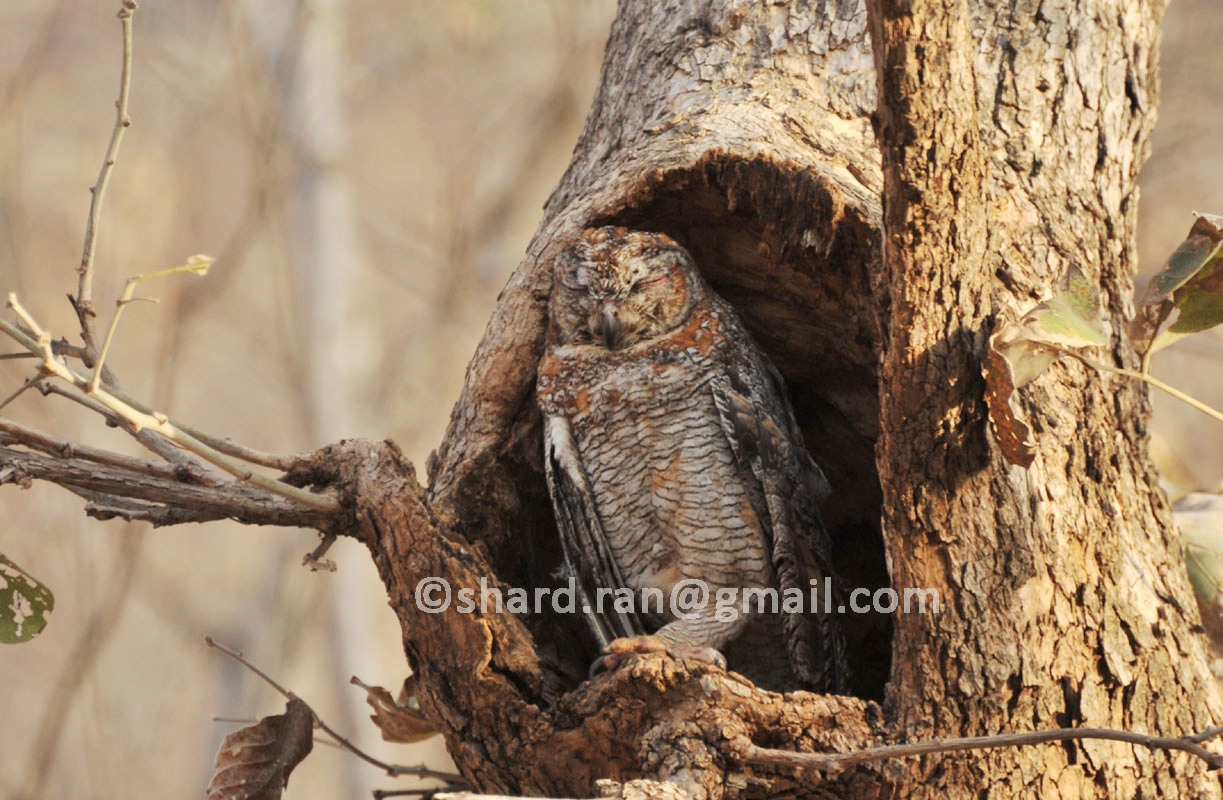 A resident species, this Pitta breeds in the north and winters down south and can occur almost anywhere on migration. The name Pitta is derived from the Telegu word 'pitta' which means a small bird.

The Stork-billed-kingfisher (Halcyon capensis) is very rare bird at Ranthambhore. It is reported only a few spots such a Gular Kui, Parani near Nal-ghati and Phuta-kot also. I also noted at Ade-Balaji Dam first time on date 21/05/2016 in the morning safari.

It is a tree kingfisher which is widely but sparsely distributed in the tropical Indian subcontinent and Southeast Asia from India to Indonesia. This kingfisher is resident throughout its range.

The common hawk-cuckoo (Hierococcyx varius) is a summer visitor and common bird at Ranthambhore. It is reported at Kachida vellay first time in this session by nature guide, Shakir Ali on 2/05/2016 pm.

It is popularly known as the Brain-Fever bird, is a medium-sized cuckoo resident in the Indian subcontinent. My first Eurasian Golden Oriole or simply golden oriole of this year was spotted in the evening safari at Anantpura area near the water point on April 16, 2016. My first sighting and photograph of the Mottled Wood Owl (Strix ocellata) at Ranthambhore Tiger Reserve. This was photographed at Lahpur area during the morning safari on April 11, 2016. Even though, Mottled wood owl already reported in our park.

I was thrilled to see the Mottled Wood Owl because I have never seen the Mottled wood owl in Ranthambhore Tiger Reserve before it. A Great day ….Thanks God !

A very rare bird, White-bellied Minivet was reported at zone no.8 in the morning safari on April 12, 2016 by nature guide, Saleem Ali. Read more

The Great Machhali was sighted at Ranthambhore Rd.

The world famous tigress, Machhali or T-16 was spotted once again at Ranthambhore Rd. while she was walking slowly-slowly in the evening time on April 13, 2016. It was really wonderful sighting of Great Machhali after long time.I saw Machhali last time on June 25, 2016.Read more.. My first Egyptian vulture (Neophron percnopterus) of this year, yellow face adult male was spotted at Raj-Bag Lake in the afternoon safari on April 7, 2016. Last year I saw this rare prey bird at zone no. 8. It is very rare in Ranthambhore.

The Egyptian vulture (Neophron percnopterus), also called the white scavenger vulture or pharaoh's chicken. Egyptian vulture was worshiped by pharaohs in Egypt due to its ability to remove garbage and remaining of dead animals. That’s why, Egyptian vulture is also known as "Pharaoh's Chicken".

Egyptian vultures are the smallest of all vultures. They can reach 23 to 28 inches in length and 3.25 to 4.5 pounds of weight. They have a wingspan of 5.6 feet.

Number of Egyptian vultures decreased drastically because of intoxication (they feed on carcasses that can be full of poisons and lead), electrocution (after landing on the electric fences) and avian pox disease. Egyptian vultures are endangered species.

The Bengal fox pair spotted at zone no.6! For me a Bengal fox- one of the rarest mammals in Ranthambhore Tiger Reserve – but I was so lucky when I saw a pair of Indin fox recently at zone no.6 in Kundal area in the morning of Monday, March 28, 2016. Read More... A medium-sized bird of prey, the Brahminy Kite is easily distinguishable from other raptors. It will measure between 45cm and 51cm. The plumage of the kite is predominantly chestnut in colour, hence the name, Red-backed Sea eagle, although this plumage is contrasted by a white head, breast and tail feather tips. The Brahminy Kite also has a yellowish bill.

As with most birds of prey, the Brahminy Kite is an impressive site to behold. The bird is currently under no significant threat, it is really big achievement, so hopefully it has been saved from the fate of possible extinction as suffered by many others. My first sighting and photograph of the Large-Tail Nightjar (Caprimulgus macrurus) at Keoladeo Ghana Bird Sanctuary. This was photographed at bird Sanctuary ( Bharatpur) during the morning safari on January 27, 2011.