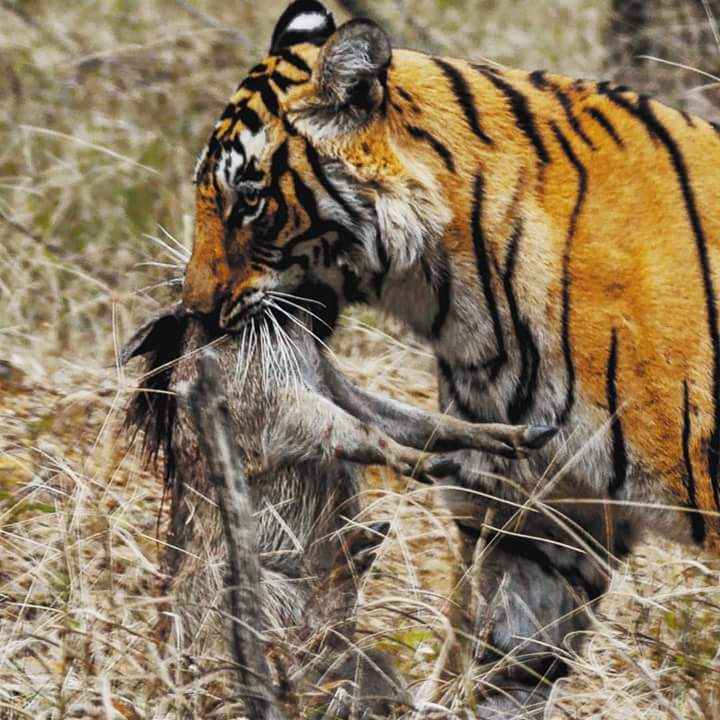 One of the Nature Guide shouted, "Nalleh me jayegi, Nalleh me". (She will move to the stream ahead)

Ranthambore, the land of tigers! My 1st National Park on the wishlist, and I did it in two years. Ranthambore National Park is different from the lush and evergreen forests of South India. This was my first time in Ranthambore, it was all together a different experience. It is different from the lush evergreen forests of South India. It has a different terrain from the South Indian jungles. It is a deciduous forest, which is quite open and rocky. It has got some beautiful landscapes, which one cannot miss. It has two mountain ranges meeting each other - Aravalli & Vindhya hill ranges, thus creating one of the best landscapes in India.

Ranthambore is one of the largest National Parks of India. It is spread in 1700 plus sq area, of which 20% comes into the tourist zone. The tourist zone are is divided into ten zones, out of which one to five zones are core zones. Those five zones are where the activities of predators can be seen regularly. Third zone is a beautiful zone with three lakes, namely Rajbagh, Padam & Mallik. The Mallik lake also share the border with fourth zone. The total no of tigers present in the park is 55 tigers, out of which 30 tigers are in the tourist zone. Apart from tigers, the park has Leopards in the predator category, while there are Sloth Bears, Spotted Deers, Sambar Deers, Blue Bull or Neelgai, Indian Gazelle or Chinkara, & Hyena. The birds include Kingfishers, Owls, Buzzards, Vultures, Eagles and many more. Crocodiles can be seen in all the lakes and there are instances where there has been a fight between crocodiles and tigers. Macchli the legendary tigress, is the one who is responsible for regeneration of the tiger population. She is the most photographed tigress in world! She killed a 14 foot long crocodile, after which she was declared the Queen of Ranthambore, and this title is given to the tiger/tigress which controls the three lake zone.

Ranthambore is one of the best places to spot tigers in their habitat and they can be seen everywhere in park. The best months to be at Ranthambore is in May & November. May is the last month of summer season & in summer the water is scarce, so they come out to the water holes to drink water, thus increasing the chances of sighting. November again because it is the start of the winter season, also because its just after the breeding season, where we can see new fauns and cubs as well.

Ranthambore is situated in Sawai Madhopur district of Rajasthan. It is well connected by road, rail & airways. Nearest railway station is Sawai Madhopur 11 kms away, Nearest Airport is Jaipur 160 kms away & 110 kms from Kota.

There are various hotels in and around Sawai Madhopur and I stayed at Ranthambore Regency, which had lovely food and stay.

So I reached to Ranthambore on 13th December and my first safari was at 14:30 hrs. Mr. Sharad Sharma was our guide for all the safaris. Within 15 minutes into the safari, we saw few gypsies hovering around a place. Once we reached there, I saw a faint figure of tigress, I knew I was in for treat.

One of the Nature Guides shouted:" Nalleh mein jayegi, Nalleh mein" , still I did not know, what next is going to happen, as it was quite possible it could go more deeper into jungle where we cannot go on gypsy or it could just come in front of us. So I was waiting to see, what drama will unfold in front of me. She was watching a group of wild boars unaware of her presence. 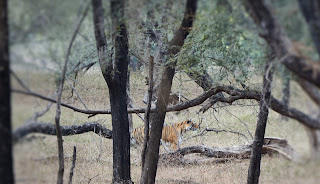 Then she vanished into the ruins and I thought now we might not see her again. Whatever happened next was in fraction of second, she just leaped on her target and kaboom!!! She had the piglet caught by it's neck. Tiger or predators normally catch the prey by it's neck, thus strangling its breath and eventually killing it or first they catch the prey by it's neck and then comes a paw thrashing on the prey's head thus giving it no chance to fight back. Next, we had her for 15 minutes giving us the images of lifetime. She was none other than Tigress Arrowhead (T-84), one of the famous tigress from second litter of the dominant female tigress T-19 or Krishna. She is a sub adult tigress and has a brother by name Packman. Their father is the dominant male T-28 or Star male . She is very bold and is fond of cameras. She then went towards the canal and from which it did not come out till that day.

This was the best sighting I had ever had of tigers and the cherry on the icing was the hunt process. She gave us the demo on hunting process. She is very beautiful and the arrow can be seen on it's forehead. After that safari, I did not see her again till the end of all the safaris. 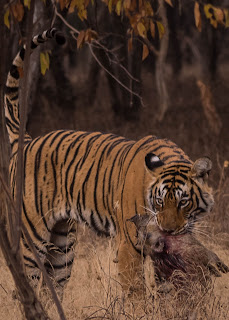 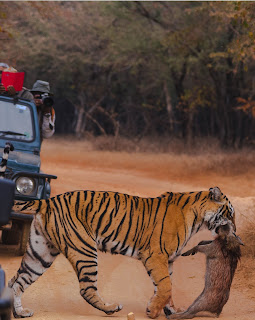