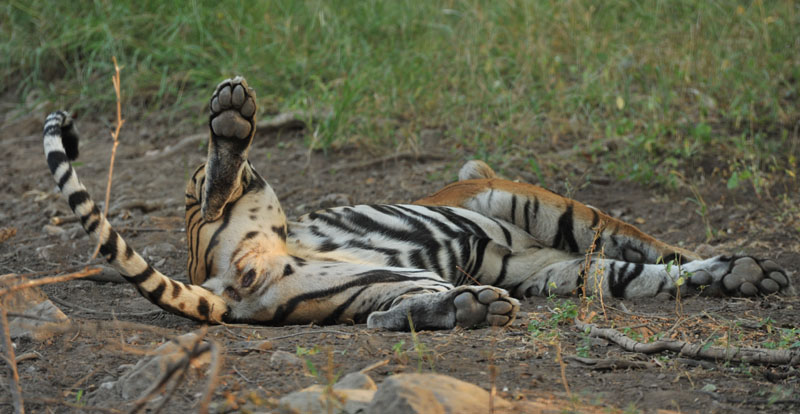 A cub to T-39 (Noor) was spotted, through camera traps installed in Sultanpur region which is the territory of T-39 that is also known as Noor.

The cub seems to be about two months old. However it isn't clear yet as in how many cubs she has given to birth but the photo shows only one cub.

Earlier, the tigress, T-39 had given birth to two litters. She had given her first litter of one male cub as Sultan/T-72 father by T-24, Conservator in 2012. The first litter was spotted on Monday 21 May 2012 by nature guide Pankaj Jain. She gave her second litter of two male cub’s father by T-24, Conservator. The second litter was spotted first time on 28 Wednesday May 2014 by Ranthambhore wild life Photographer, Aditya Singh and now it is third litter of her… Great Mom from Ranthambhore Tiger Reserve.

There is one more great news from another tigress T-60 has also given birth to two cubs recently in the tiger reserve. New born cubs should be around 3 and 4 months old.It is supposed that it might be a first litter of T-60. She is about 5 year’s old, quite young tigress.

Tigress, T-60 is a daughter of T-31, Indu, mother from Indala area. She had given a litter including two females. After grew up as sub adults, they had separated from her mother (T-31) and both female cubs are known as T-59 and T-60.