Ranthambhore National Park - where history blends in the wilderness 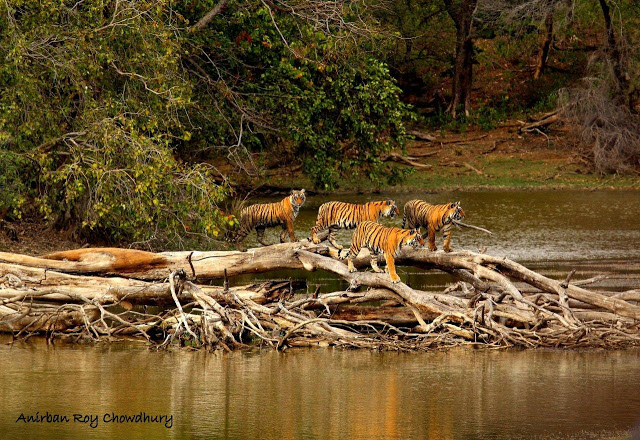 As our canter rushed past the Padam talav ignoring the huge marsh crocodiles basking in the sun beside the ruddy shelducks, and approached the Rajbagh talav we could see hordes of canters and gypsies carrying both cacophonous tourists and serious wildlife enthusiasts, have already lined up by the edge of the lake with the anticipation of sighting of Tigress Krishna (T 19) and her cubs. Krishna with her three sub adult cubs has recently known to have made the lake in Zone 3 her favorite habitat. Though her territory spans across Zone 2, Zone 3, 4, 5 and an area beyond the tourist zones, the Rajbagh Lake is her favorite abode. Just as our canter led by an experienced park guide Shard Sharma parked itself at a vantage point, there emerged the queen from amidst the dense lush grass at the other side of the lake. She came out silently, confident and poised, scanned the surroundings and disappeared soon again inside the thickets. All in the blink of an eye! The desperate alarm calls of langoor monkeys and frantic clicks of the camera shutters both subsided as suddenly as they started…..only thing that prevailed was the sounds of excitement! Read more