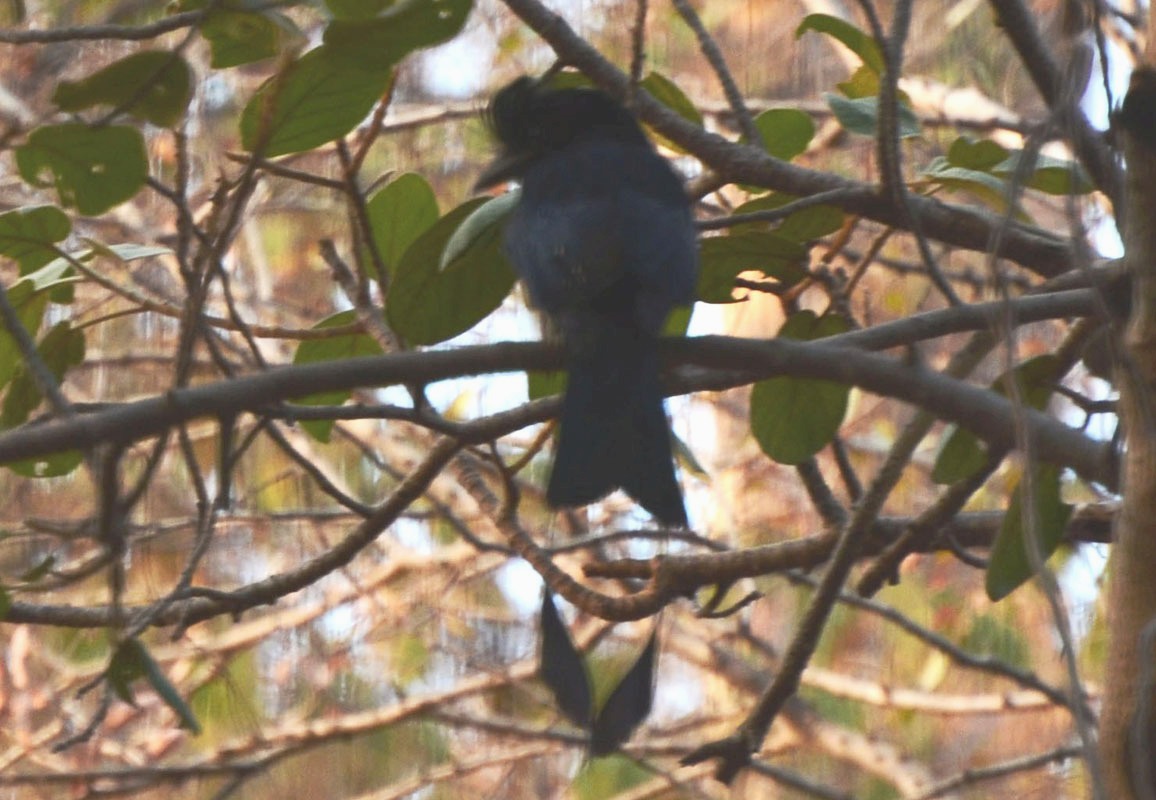 Greater racket-tailed drongo (Dicrurus paradiseus) was spotted in the morning safari on Tuesday, November 07, 2017, 7:43:58 am. It is really very rare bird for Ranthambhore Tiger Reserve. Earlier, it was reported few times but without photograph. So, first time it was reported with photograph.

It all started when I was in gypsy as a nature guide, at zone no.4 in Ranthambhore Tiger Park, Rajasthan, India. While scanning the trees, I noticed a Black bird was sitting on a branch of Ficus tomentosa among the leaves. Therefore, I was able to see its head only. I thought that it should be the Black drongo which is quite common in the park. Suddenly, it took fight up and sat down another branch while I noticed it’s long tailed. I really surprised to see its long tail and got confusion. My smart driver, Gajanand stopped the gypsy immediately and waiting for right angle. At last, he went back one meter and put the gypsy right angle where I was able to take a few record shots of it. Soon it disappeared from our eyes. Then, I saw in my camera and known it was Greater Racket-Tailed Drongo, but still confusion. Everything was so quick. Whole incident took hardly 3 minutes. No doubt, without great cooperation of Mr.Gazanad, deriver, it was not possible to shot any record picture. Thank you very much Gazanand JI for doing all so quickly.

I found it closed to kachh-Chata at Tama-Khan crossing. Later, our well known biologist and wild life expert, Mr. Dharmend Khandal confirmed it.

The body of Greater racket-tailed drongo is glossy black with shades of blue and green. The blue extends from behind their reddish-brown eyes to about halfway down the back. Its wings and the tuft on the top of the head are green with a hint of pale yellow on the very tips of the wings. Greater racket-tailed drongo has two wire like ‘racket’ tipped feathers that extend beyond the tail. It can weigh from 70 to 125 grams and are 31 to 36 centimeters in body length, not including their elongated tail feathers. Males and females are similar in appearance.

They usually breed from March to June but there is quite a bit of variation in the breeding season in different localities. Birds found in the northern parts of their range tend to mate much later in the season, between month of June and July. Populations in more southern, tropical regions tend to mate much earlier, around February.

It has nest like saucer in shape. They are made of intricately intertwined roots and leaves with fine materials lining the inside. They are held together with cobwebs and camouflaged with lichens. The nests are often found at a horizontal fork of two branches. Greater racket-tailed drongos tend to lay 3 to 4 eggs.

On date November 9, 2017, it was reported near Tama-khan again by nature guide, Dev Raj Singh in the evening drive.

commented on whatsaap on it, " Yes first photo record of the bird from Rtr. Earlier seen by Rahul Rao of Pune in Lahpur area. Rahul spent 15 days in lahpur as a volunteer with forest department in 2006. Since he is a well known bird expert. We consider his report as first report but this is a very significant report from Ranthambhore . Many congratulations to Shardji for recording it and sharing. Indeed a great news."

Now, we have added new member as Greater racket-tailed drongo in the family Drongos (Dicruridae) after White-bellied Drongo and Black drongo. It is wonderful news for bird watchers !